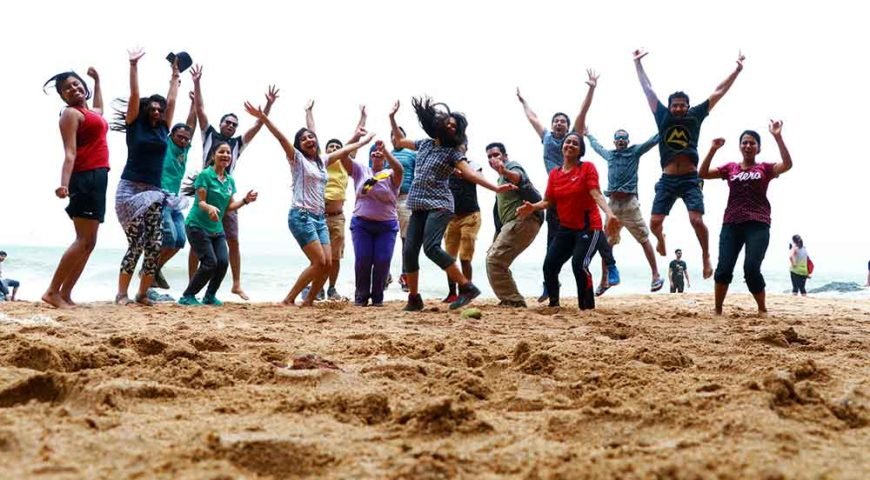 Located on the banks of the Tungabhadra river, Hampi is a place of rich history and mythology. It was the capital of the Vijayanagara dynasty ruled by Sri Krishnadevaraya. It is also said to be “Kishkinda” which is the Monkey kingdom in Ramayana. The ruins and monuments of Hampi were declared as UNESCO world heritage sites. The other side of the river is Hippy Island, which is an offbeat place and backpacker paradise that attracts travelers from across the world, especially from Israel. There are many interesting things to do in Hippie Island like camping in tents, trekking, etc. Overall Hampi is an amazing combination of hillocks filled with boulders, monuments, ruins, temples, laid back cafes, arts, and shopping. The sunsets here have their own charm, especially from atop these hillocks. The season starts in June and goes all the way till early summer. It is one of the must-visit places for a weekend trip from Bangalore, Hyderabad, Pune, and Mumbai.

Considered as the biggest hill station in Karnataka, Coorg is a district comprising smaller towns like Madikeri, Tala Kaveri, Kushalnagar, and Somwarpet – each of them has its own tourist attractions. Elephant camp, Namdroling Monastery Golden Temple, and White Water rafting (post monsoons) are famous in Kushalnagar. The most popular town is Madikeri with attractions like Raja’s seat (a viewpoint), Abbi waterfalls, and Fort. Tala Kaveri is the birthplace of the Cauvery river. Coorg is a go-to place for Bangaloreans who are looking for a quick weekend getaway. It has a pleasant climate throughout the year. Coorgie cuisine is famous among non-vegetarians. The highest peak of Coorg called Tadiandamol is a well-known trekking destination along with the challenging Kumara Parvatha trek. A drive through Nagarhole wildlife sanctuary with a visit to Iruppu waterfalls nestled in Brahmagiri hills is another great experience.

A lesser-known cuisine of Coorg,  Sakleshpur is an offbeat destination if you are seeking solitude and peace of mind. It is famous for its delicious Malnad food, both for veggies and non-vegetarians. Sakleshpur is known for its homestays, nestled in coffee estates, with great hospitality. Easy trekking to Pandavas mountain is a must to capture beautiful views. One can even camp in the tents at the estates. It receives a good amount of rainfall in monsoons with a pleasant climate which is a lifeline for its coffee, pepper, cardamom areca nuts plantations. A dip in the cold waters of Habbi waterfalls is thrilling. There is a star-shaped military structure called Manjarabad Fort that attracts tourists from different corners. An open-top jeep ride to Devil’s hill for sunrise is another breathtaking experience. It is good to travel most of the year barring peak summer – March to May. Sakleshpur is the nearest hill station from Bangalore, easily accessible by road and train.

A one of its kind “Beach trek” overlooking endless views of the Arabian sea is a must in the bucket list of every traveler and trekker. The beaches of Gokarna are separated by hillocks with a thick green cover. Trekkers have to climb up the hill, go through the woods, and climb down to reach the next Beach. It’s a great place for an offbeat beach trip with white sand beaches, pine, coconut trees, beach shacks, and campsites. The town itself has a famous temple, beach, and a flea market. Camping is a great experience on one of the private beaches – especially on Nirvana Beach away from the crowd. Gokarna belongs to the Uttara Kannada district which has more hidden attractions. Vibhooti waterfalls are one of the best places in Karnataka to take a soul-soothing dip. Yana rocks that are formed by volcanic lava stand high in the dense forest. They form natural caves which can be explored by doing a small trek. Gokarna is good to visit throughout the year. While camping is best in summer and winter, staying in shacks is better during monsoons.

Mangalore is the biggest city on the Konkan coast which is rich in culture, food, and beaches. Tannirbhavi beach and Panambur beach are two of the best beaches. They offer plenty of adventurous water sports like Parasailing, Jet Ski, Banana ride, Bumper ride, etc. along with great varieties of street food. There are pretty temples, churches, and shopping markets dotted around the city. Mangalore is famous for its cashew industries making the best quality nuts. It has a distinct cuisine ranging from varieties of Seafood to vegetarian delicacies like Mangalore buns, Goli Bajji, Neer Dosa, and deserts made of its favorite Coconut. There is an offbeat attraction called Kapu beach with a lighthouse an hour away from the city. Sitting on the rocks at the base of the lighthouse and witnessing a serene sunset in the foreground of relentless waves is an experience to savor. It is very easy to reach Mangalore from anywhere in the country through all modes – road, rail, air, and sea!

If there is a place close to heaven on western ghats, it has to be the Agumbe rainforest located in the heart of the Malnad region. Because of its strategic location it receives one of the highest amounts of rainfall in the country. It can actually give a run for the money to Chirrapunji. A whole new ecosystem comes to life when monsoons hit Agumbe starting in June. It is home to the rare species of reptiles, amphibians, butterflies, mammals, and birds. In fact, Agumbe is called the King Cobra capital of India. One can witness waterfalls, streams, rivers, and lakes at their full glory. Trekking and staying in a forest village homestay are major attractions in Agumbe. Camping is a good option in drier months. The highest point of rainforest called Kundadri Hills and Malgudi days house are frequented by travelers. Agumbe is a feast for nature lovers and photographers. If you wish to get wild and wet in the raw and untouched form of mother nature, Agumbe is the place for you.

Another famous hill station which is called ‘Coffee Land of Karnataka” is Chikmagalur. Coffee was first brought to India by traders a few centuries back. It boasts the highest peak of Karnataka called Mullayanagiri which can be reached by an easy trek. Chikmagalur is famous for trekking places like Kudremukh, Kurinjal, and Bababudangiri. Another famous attraction is a jeep ride to Buttermilk waterfalls which is good to take a cold shower. Chikmagalur means the town of a younger daughter whose sculpture is beautifully inscribed on the rocks on the outskirts of the town. Camping among coffee estates is one of the best experiences here along with its great food. Close to the town, there is a reservoir named Yagachi that has many adventurous water sports. The town has a Lake named Hirekolale surrounded by a picturesque setting. Located in the same route, Belur temple with Hoysala architecture is the finest example of art unique to India and Karnataka.

A small river town situated in north Karnataka bordering Goa is probably the adventure capital of Karnataka. Water released from a huge reservoir built across river Kali makes way for water sports almost throughout the year. The best of adventure sports like White Water Rafting, Kayaking, Jacuzzi, Zorbing, and River crossing are available in Dandeli. If you are not very adventurous, you can go for milder ones like boating and swimming. Life jackets are mandatory for everything. These sports are organized by tourism board-certified resorts, and hence are completely safe. Dandeli also has few sightseeing spots like Moulangi Eco Park, Syntheri rocks (volcanic formations), and Crocodile Park. There is an offbeat place called Kavala caves an hour away from the town which is famous for offbeat trekking. Camping is the best experience in Dandeli which is surrounded by dense jungle on all sides. Travelers usually visit Karwar after Dandeli which is in the same district.

Situated deep in the western ghats, Kodachadri is one of the most beautiful places in Karnataka. There is a 4×4 jeep trail that takes travelers to the peak. The views from the top are absolutely magnificent, especially in the evening at the time of sunset. On a clear day, one can get a glimpse of the Arabian Sea. Hidlumane waterfalls at the base of Kodachadri is a major attraction. Kodachadri is translated to “Jasmine of Hills” because of intermittent patches of Jasmine flowers along the trail. It is a place that shows different colors and shades in each season. There are interesting places around Kodachadri like Nagara Fort and Rainforest water pools, which are good to visit during and post monsoons. Since it is not too far from the west coast, travelers usually give a visit to the popular Malpe beach of Udupi town after experiencing Kodachadri. The beach is famous for its watersports and vibrant crowd. One can take a 20 min ferry ride to reach Saint Mary’s Island off the coast.

Mysore with its rich cultural heritage has many attractions like Mysore Palace, KRS Dam, Brindavan Gardens, Karanji Lake, and many more. The view of Mysore town from atop Chamundi hills is much loved by travelers. There is a beautiful place called Ranganathittu bird sanctuary in the outskirts of town which is a treat for nature lovers and photographers. Mysore can also act as a pit stop for bigger hill stations outside Karnataka like Ooty, Nilgiris, or Wayanad. Bandipur National Park is just an hour’s drive from Mysore town, which was once a private hunting ground of Mysore maharajas. Today, the Forest department organizes Bus and Jeep safaris into the protected wildlife reserve. Spotting wild animals like Tigers, Elephants, Sambar Deer, Wild Dogs, Peacocks, Bison, Leopards, etc at their natural habitat is truly a fascinating experience. Bandipur is located at a tri-junction connecting 3 states – Karnataka, Tamil Nadu, and Kerala.

All in all, Karnataka is truly a traveler’s paradise that offers a diverse set of experiences and incredible places to visit. It attracts travelers from everywhere in India. Pack your bags, put that traveling cap on!